Activists from Palestine Action threw red paint, and five locked themselves outside the "UAV Engines" drone manufacturer facilities near Birmingham on Monday, July 4, 2022.... 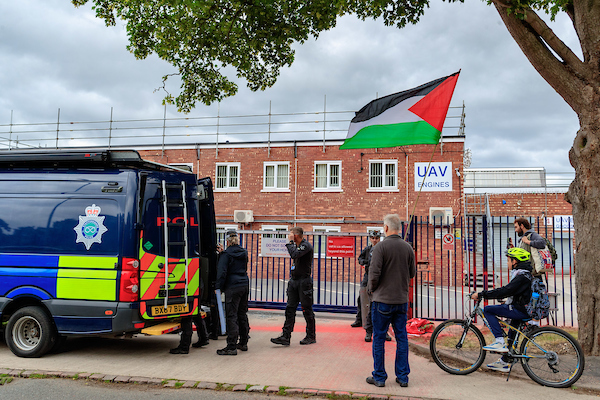 A Palestine Action supporter waves Palestinian National Flag as they shout "Shut Elbit Down" during a protest outside the facilities of "UAV Engines" drone manufacturer near Birmingham on Monday, July 4, 2022. (VX Photo/ Vudi Xhymshiti)
by VXPictures 4 July 2022 36 Views

This is the second year of the continuous non-violent direct action of the movement aiming to sabotage the weapons manufacturing of the Israeli-owned arms manufacturer “Elbit Systems” in Britain.

Hundreds of Palestine Action activists are routinely detained and arrested by the British police in various arms manufacturing sites across the United Kingdom after they are found to be throwing red paint, smashing windows and doors of the arms manufacturers and locking themselves in their facilities to prevent workers from producing arms.

The movement’s presence and activities persistence has forced British police to establish a specialised unit for removing protestors across the country, now known as the Police Protest Removal Unit (PRU), from the sites with consideration to Health and Safety law.

On Monday, the British PRU unit of Staffordshire police dismounted five locked activists and arrested them for criminal damage and aiming to trespass and sabotage the factory’s work, which the activists say “has Palestinian blood on their hands”.

Palestine Action forced “Elbit Systems” to quit its prestigious London headquarters at the end of June this year.