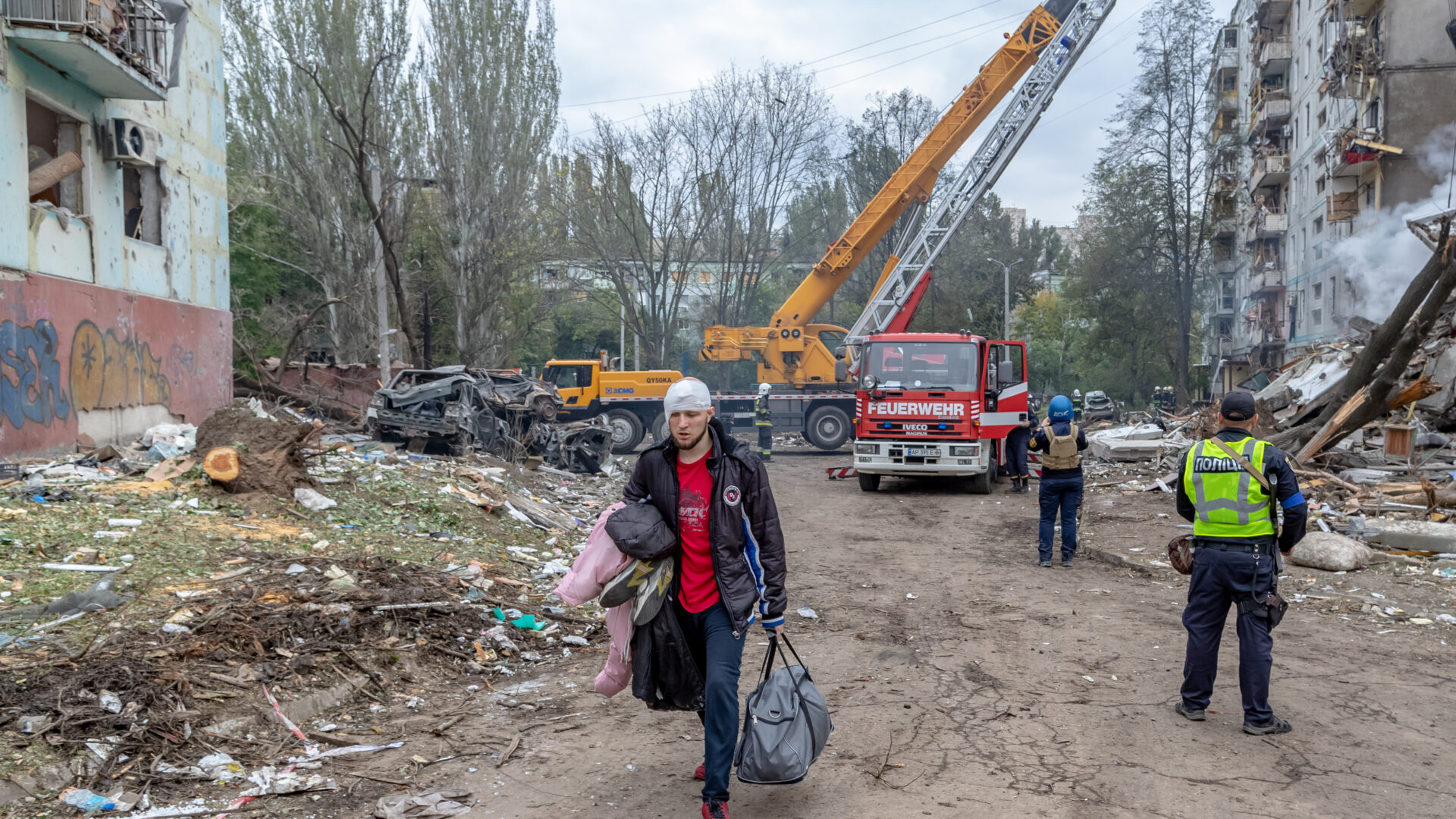 A Russian missile, one of an estimated 16 fired into Zaporizhzhia early in the morning of Sunday, October 9th, had exploded into the nine-story apartment building the Horelov family...
by Kristopher Parker 9 October 2022 31 Views

Bohdan Horelov was at home with his parents in their seventh-floor apartment when the attack occurred.

“I was in the main room when it happened. The balcony was blown up and the shrapnel hit me in the face. My father was on the balcony at this moment,” the 22-year-old explained, fighting back the tears running down his bandaged face.

A Russian missile, one of an estimated 16 fired into Zaporizhzhia early in the morning of Sunday, October 9th, had exploded into the nine-story apartment building the Horelov family called home. The attack completely collapsed the centre section of the building, burying residents as they slept in what has become a terrifying new normal for residents of Zaporizhzhia. Russian missile attacks on civilian targets have dramatically increased since the end of September, with attacks on residential areas now occurring nightly.

“I woke up as soon as this rocket arrived,” said 73-year-old pensioner and local resident Olena Dmytryvna. “There was a lot of fire and about seven or eight explosions, one after another,” she explained. Her apartment building sits across the street from the Gorelov family’s, and her windows were shattered during the explosions.

“We survived this night under complete stress. I just want all this to end,” she said.

The attack on the Osypenkivskyi Zhytlomasyv neighbourhood began around 2 AM, destroying numerous family homes and severely damaging several apartment blocks. Secretary of Zaporizhzhia City Council, Anayoliy Kurtev, put the number of dead at 17 early Sunday, with at least 60 wounded, including six children hospitalized. The number is expected to rise as rescuers search through the rubble.

“Step by step, we remove dangerous debris from the top of the building so we can dig through the rubble,” explained Artem, a 29-year-old fireman whose crew had been working nonstop to rescue people from the rubble since four in the morning.“Some people have been saved from the first floor, but no one has been saved from under the rubble yet, it’s too dangerous to get close right now,” he explained, over twelve hours after originally arriving. Residents were occupying each apartment that had collapsed after the strike, though the exact number remained unknown.

Members of the Fire Department, State Emergency Service, police, military, and volunteers, including from World Central Kitchen and Pavlograd Search and Rescue Canine Unit, quickly arrived on the scene to assist in rescue efforts.

“We came here with dogs, which are looking for both living people in the rubble and also dead bodies and remains,” explained 31-year-old Borysenko Larysa Anatoliyvna of the volunteer team with search and rescue dogs.

“Unfortunately, this is the second time we are working in this area,” she said.

According to residents, Zaporizhzhia has been subject to daily attacks since the month began, with an attack on Thursday, October 6th, claiming the lives of another 20 civilians. This follows an attack on September 30th that killed at least 30 people in a convoy of civilian cars on the city’s outskirts. The trend has continued, and frequent attacks on the city are taking their toll on survivors.

“When a child is waiting for their parents to be taken out from under the rubble, when relatives come and say that there are children under there, and see it is not a member of their family who has just been pulled out, this is all very scary,” explained Olena, a psychologist on site who provided only her first name.

“People are shocked. How can a person feel when his father and mother were torn apart in front of his eyes, and the child was collected in pieces?” she said, describing the emotional state of residents she had encountered.

“People were sleeping peacefully in their beds, some of them did not even have time to get scared because they did not wake up.”

Roughly three kilometres from the attack on the apartment building, an entire section of single-family homes living near School 61 on the Leontovycha Street intersection were flattened by Russian missiles in the same attack, transforming the area into an ashen moonscape. Authorities have not yet determined how many people have been killed there, and efforts to search through the rubble were ongoing well into Sunday evening.

“When I first arrived, I felt fear; fear and then fury for Putin and his army,” explained Vitalii Pashov, a 53-year-old construction worker who was one of the dozens helping to clear away the massive amounts of rubble. “Where are the military targets?” he said sardonically. “There are only civilians here. He and his army have only brought pain to our land.”

In recent weeks, Russian forces have been losing ground to Ukrainian counter-offensives in Kharkiv and Kherson Oblasts, while President Vladimir Putin announced the illegal annexation of four regions of Ukraine, including Zaporizhzhia Oblast on September 30th. The increasing attacks on Zaporizhzhia have coincided with these events and are often indiscriminate, with children among the victims.

67-year-old Vera Petrovna was at home with her seven-year-old granddaughter Lisa when her neighbour’s homes began exploding.

“I don’t know how, but the shockwave knocked me out of my bed,” she explained. “I quickly grabbed my granddaughter, and we hid behind another wall.”

Petrovna’s home sits on the edge of the ring of flattened houses, which included her daughter’s house across the street. Her daughter survived the attack but her 10-year-old grandson was hospitalized, suffering a concussion while doctors had to remove shards of glass embedded in his right ear.

“I hate all those that are supporting Putin right now,” she said, watching as volunteers sorted through the rubble of her daughter’s home.

Amidst this destruction, 41-year-old Tetyana Slavchenko slowly wandered and surveyed the damage to her neighbours’ homes with tears in her eyes. “I’ve lived in Zaporizhzhia all my life, but this is very scary,” she said.

“I cannot leave because my neighbours have already fled, and they left their pets with us, and we cannot leave them alone,” she explained. “I hate Russia for this. Save our Ukraine.”

Despite the devastation inflicted early that Sunday morning, there has not been any respite from the attacks. Roughly 24 hours later, another barrage of missiles destroyed targets around Zaporizhzhia, with early reports indicating hits on a kindergarten, gymnasium, electrical infrastructure, and a 5-story building in the city centre. At least one person was reported killed, and five were wounded, followed by another two people killed on the 15th and three injured on the 21st of October.

Kristopher Parker is a writer from the United States who is currently focusing on eastern Europe. Kris joined VX Pictures as a writer in September 2022.