An estimated 800,000 ethnic Albanians fled from Serb forces into Albania and Macedonia during the Nato bombardment....

People of Kosovo celebrates independence, in the capital Pristina, Sunday, Feb. 17, 2008. Kosovo declared independence from Serbia in 2008 recognized by more than 100 countries but not by Belgrade. (VX Photo/Vudi Xhymshiti)
by VXPictures 17 February 2008 99 Views

The parliament of Kosovo has declared its independence, spurred by the region’s majority ethnic Albanians. The move comes nine years after the United States and NATO began airstrikes against Serbian military targets in the former Yugoslavia.

While it has stated that it has a plan of action in place if Kosovo tried to break away, Serbian officials have ruled out any military action to retain the region. Instead, experts say, the country is likely to use sanctions and trade pressures to influence Kosovo. 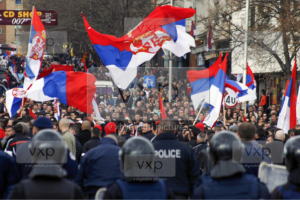 Cheering “Kosova is Serbia-Kosovo” – “Kosovo is the heart of Serbia” and with flags of Serbia and countries who oppose recognition of the state of Kosova, on Friday, February 22, 2008 – more than 3.000 Serbs in northern Mitrovica protested against Kosovo’s independence. (VX Photo/Vudi Xhymshiti)

Serbia’s continued resistance to Kosovo becoming a state in its own right was challenged in 1996 when the Kosovo Liberation Army (KLA), an armed force supported by ethnic Albanians, began targeting Serb police units in Kosovo.

Serb police forces started battling against KLA separatists in 1998 before Serbs voted against international mediation on Kosovo’s future in a referendum.

The KLA took control of an estimated 40 per cent of Kosovo in mid-1998 before Serb forces wrested the KLA-held area back.

An estimated 800,000 ethnic Albanians fled from Serb forces into Albania and Macedonia during the Nato bombardment.

The United Nations has administered Kosovo since 1999, shortly after Serb forces were driven from the province.

In recent months, Martti Ahtisaari, a UN envoy, recommended a plan to set Kosovo on a path to supervised independence.

The timetable, which was rejected by Serbia, is likely to be followed by Kosovo’s administration should independence be declared.