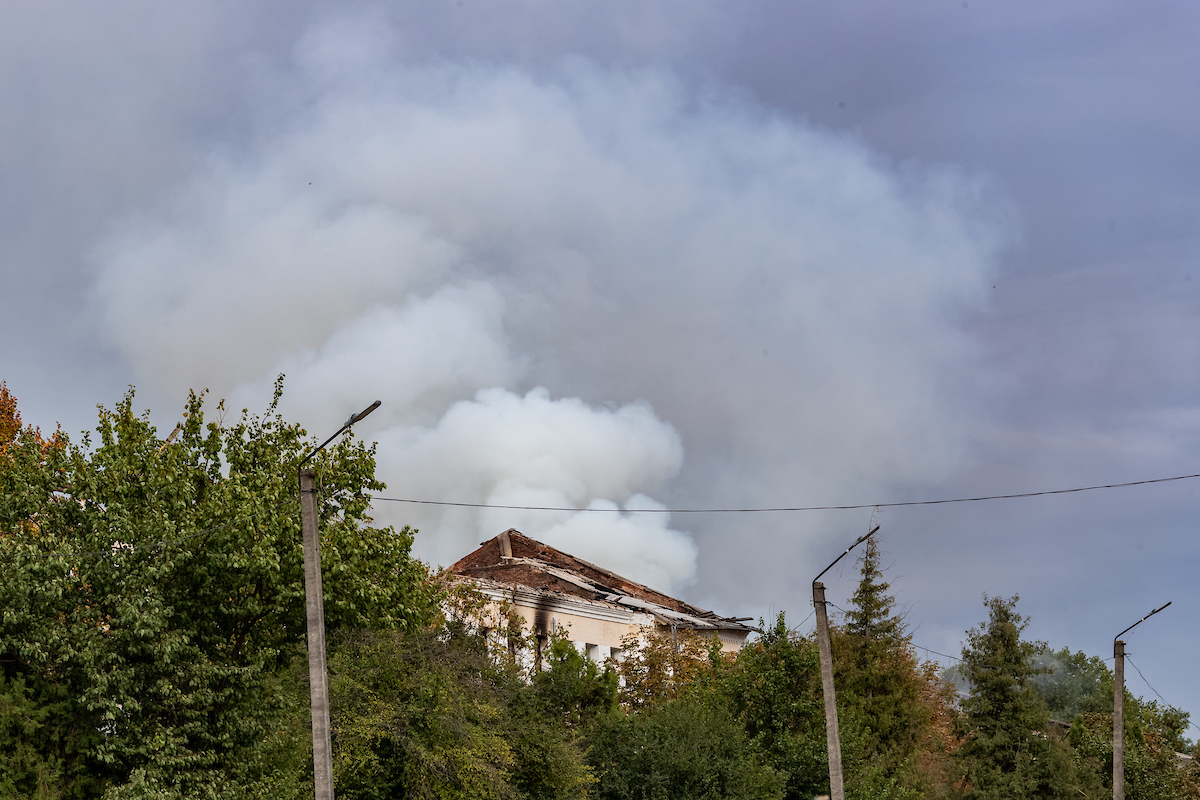 Russia’s use of Iran-made drones has emphasised the sense of a shared struggle between Iranians at home and in Ukraine....
by Kristopher Parker 5 October 2022 14 Views

When a buzzing was heard over the cloudy skies of Odesa on 23 September, it was followed by a crackle and then gunshots, it was one of the first documented instances of the Ukrainian military opening fire on an Iranian-made drone.

Back in Iran on that same day, 23 September, demonstrators engaged in the largest anti-government protests in years were faced with signs that the army would crush dissent. 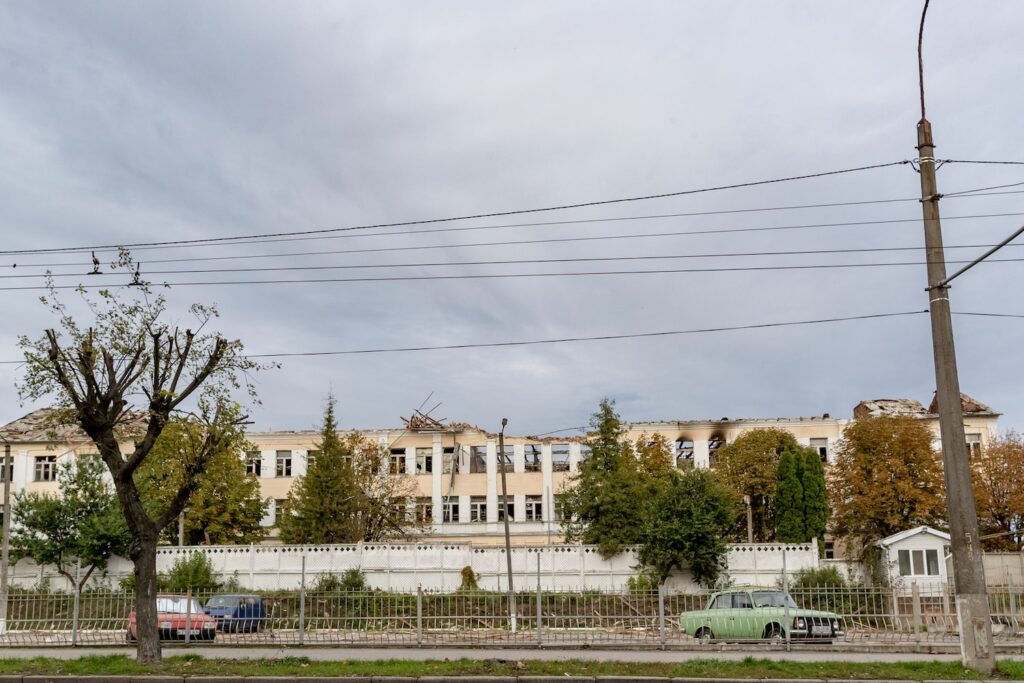 The display of violence in Ukraine and Iran has inspired intense outrage in Ukraine’s Iranian community.

After months of speculation, the Russian military was now openly deploying lethal Iranian drones in Ukraine that were supplied by the same authoritarian regime engaged in political and social repression in Iran.

The regime, which had long posed a risk to the lives and well-being of friends and family back in Iran, was now a threat to Ukraine.

Many in the diaspora have expressed a desire to publicly distance themselves from the regime that controls their country of birth.

“We consider ourselves to be a part of Ukraine,” says Ali Reza Farokhiyan, a 28-year-old IT worker who moved from Iran in 2012.

“All of us have been living here for a very long time and feel we are a part of these people,” he explained.
3 September: Russian strike on Odesa with Iranian drone. Source: Military news about Ukraine.

Farokhiyan was living near Irpin, a city bordering Kyiv, with his Ukrainian wife when Russia’s full-scale invasion began on 24 February.

“It was the most horrible day of my life,” he said, recalling the first hours of the Russian invasion. “I went to the window and saw something red on the horizon, and of course, it was the bombs falling.”

After collecting their cats and a few belongings, Farokhiyan fled with his wife to her mother’s home and relative safety in western Ukraine.

For Farokhiyan, Russia’s use of Iranian-supplied drones has only emphasised the sense of a shared struggle between those in Ukraine and Iran for Farokhiyan. “We have common enemies,” he explains.
Iran is suspected of supplying Russia with lethal drones over the summer, and they began appearing in the skies over Ukraine in September.

Iran’s Shahed-131 and Shahed-136 drones, in addition to the Mohajer-6, have been confirmed in attacks on Odesa, Mykolaiv and Bila Tserkva. The Shahed-131 and 136 are sometimes referred to as ‘kamikaze’ drones since they explode upon impacting a target. The Mohajer-6 is a multipurpose drone that can be used for surveillance or launching missiles.

Cooperation between the Islamic Republic of Iran and the Russian Federation has been in the making for years, with both governments coming to the military aid of Syrian dictator Bashar al-Asaad. Iran was also accepted into the Russian-dominated Eurasian Economic Union (EEU) in 2019, providing a needed boost to its sanction-riddled economy. Despite this and evidence from the ground, the Iranian government currently denies providing Russia with military drones.

Farokhiyan is not alone in his outrage over the Iranian government’s recent actions. On 30 September, members of Ukraine’s Iranian community organised a protest outside the Kyiv embassy of the Islamic Republic of Iran in Kyiv.

Several dozen people – all of whom had emigrated to Ukraine for different reasons – gathered to express a shared condemnation of both Iran’s supplying of Russia with Iranian-made drones, and the brutal crackdown on protests occurring across Iran as hundreds of thousands of people have taken to the streets in what is reportedly the largest uprising against the regime since 2009.

One of the Kyiv protest’s organisers, 41-year-old Masoud Goreishi, has been living in Ukraine since the age of seven, following his father who moved to Ukraine to work for the United Nations. He has been fighting in Ukraine’s army since the start of the full-scale invasion and has been outspoken in his criticism of the Iranian government even prior to the latest protests.

“Personally I am ready to do anything. Two weeks ago I said goodbye to my mother in Iran. I said goodbye to the person who gave birth to me, and we both cried even though we are adults,” Goreishi explained. “Due to the lawlessness in Iran, I know that I might not be able to see her again.”

The protests in Iran erupted shortly after 22-year-old Mahsa Amini died in police custody on 16 September, and have since spread to 80 cities nationwide. Three days before her death, Amini was arrested by Iran’s ‘morality police’ for wearing her hijab too loosely. Her family say she was beaten to death – claiming a hospital report shows she suffered a blow to the head – though this is denied by police, who claim Amini had a heart attack.

The law mandating the compulsory wearing of the hijab has become increasingly unpopular within Iranian society in recent years, and is often seen as symbolic of the state’s facilitation of gender-based violence.

Many participants remained optimistic despite the intensity of state violence in Iran – with 185 people reported to have been killed in the ongoing protests, as security forces attack demonstrators, according to an Iranian human rights group.

“I’ve seen many protests in Iran before, but I hope with the support of the world, maybe this time we will be able to achieve something,” said Ali Reza, a 50-year-old businessman, outside the Iranian embassy. “The [Iranian] government has absolutely no excuse for these violent actions.”

In a recent interview on Iranian state TV, President Ebrahim Raisi described the protests as “chaos” that would not be accepted. “Whoever participated and ignited the chaos and riots will be held to account,” he warned.

But the protesters – both in Iran and in Ukraine – remain resolute in their fight for justice and equality.

“Women in Iran don’t have the right to live like normal, we don’t have a normal life,” said Miranna, a 31-year-old Iranian resident of Kyiv, who did not want her last name published. “The protests aren’t just about women, but we face more pressure than men, making life so hard for us,” she explained.

For Somi, an Iranian student living in Kyiv who also gave only her first name due to out of safety concerns, stressed that while she and the other demonstrators in Kyiv are not on the ground in Iran, the protesteors there have her full support.

“I want the women in Iran to know we are with them and for the world to know that this government does not represent the wishes of the Iranian people,” she said. “What we want is peace and justice.”

But back in Kyiv, it’s likely that these Iranians will see the effects of their country’s munitions more often.

Iranian drones are believed to have been used during the mass rocket attack against Ukrainian cities, including Kyiv, on 10 October.

Kristopher Parker is a writer from the United States who is currently focusing on eastern Europe. Kris joined VX Pictures as a writer in September 2022.