UKRAINE: Winter is coming in Borodyanka

Winter is coming in Borodyanka, the story of bombarded houses and the people who lived there.... 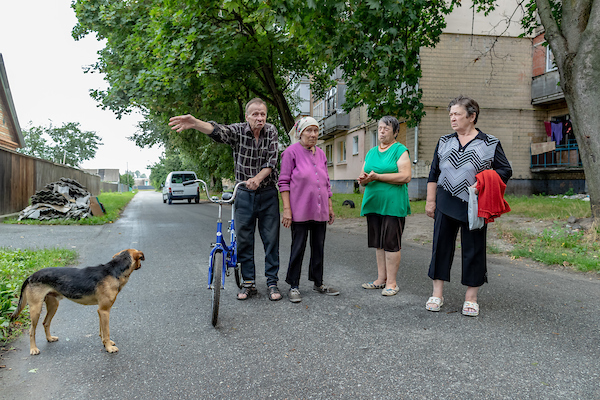 This is a portrait picture of the Ukrainian elderly concerned about the winter. Ivan, 68, is left in the picture, followed by Katerina Pihorova, 71, Valentina, 74 (married to Ivan) and Halina, 73 and their social dog Sharhan aged 2 - photographed on Saturday, Aug 13, 2022. They all live nearby Naberezhevna Street in Borodyanka, the town where the Apocalyptic scenes of destruction remain unforgettable five months after the Russian bombing of northwest Kyiv.
by VXPictures 15 August 2022 102 Views

Winter is coming in Borodyanka, the story of bombarded houses and the people who lived there.

Local authorities say Borodyanka is an urban-type settlement in Bucha Raion of Kyiv and Oblast of Ukraine.

Borodyanka was hit particularly hard by Russian attacks, suffering the most massive destruction of any town in the Kyiv region. The situation in the liberated city is utterly devastating.

In the bombarded town of Borodyanka, northwest of Kyiv, lives Katerina Pirohova, a lady at her age of 71, mother of one daughter, 49 of age – with a granddaughter of 16 whose whereabouts are unknown to this day since the war began.

Russian warplanes flew and dropped bombs in her neighbourhood, airstrike shockwaves destroyed her house’s structure, and the windows went off, including doors inside the house. She’s worried about the winter the most.

“Those who have the money recovered their homes, but those who don’t can’t do anything,” she said, bursting into tears while speaking to us.

The only person she received support from was the man in charge of the local graveyard. “I am still in the same outfit since the war started,” she told us on Saturday, Aug 13, 2022.

We also met with Halina 73, whose rooftop is leaking. Valentina, 74, and Ivan, 68, are homeless. Their daughter lost her legs following an airstrike by the Russian warplanes.

Scenes of destruction and apocalypse are not a picture to see for the residents of Borodyanka; they are scenes in which they have lived since the Russian Armed Forces launched military aggression on Ukraine’s territorial integrity on February 24, 2022.

The collective apartment was torn apart by a Russian bombardment. In detail, emergency stairs, living rooms, or bathrooms are visible from the outside photographed on Saturday, Aug 13, 2022. (VX Photo/ Vudi Xhymshiti)

Photojournalist: Vudi Xhymshiti.
Production Assistant: Oleksander Pugach.
To inquire about the full story of this reportage, please email us at production@vxpictures.com.

This content is intended for editorial use only. For other uses, additional clearances may be required.