Alosha was reportedly killed in his position by an Azerbaijani shell the family say. "He was a sniper shooter" his father Alihan remembers. Alosha was the father of three children. Two daughters and one son. From the age of 8 from his daughter to 12 years of his son and 15 years of age of his older daughter.

A moment of family reunion in the oustkirts of Stepanakert, disputed region of Nagorno Karabakh on Thursday, Dec 24, 2020. (VX Story/ Vudi Xhymshiti)
by VXPictures 24 December 2020 101 Views 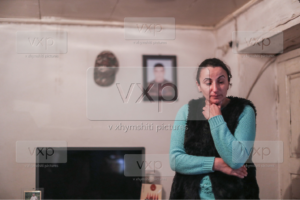 Gulnara (in picture), now a widow in her late 30’s (38 of age) finds it difficult to raise three children alone, with a recently half-built house by the borderline with Azerbaijani armed forces. (VX Story/ Vudi Xhymshiti)

During 44 days of the war, the region saw an end of the conflict after a ceasefire agreement was signed by the leaders of Armenia, Russia and Azerbaijan on 9 November to end the military conflict in Nagorno-Karabakh. Azerbaijani government established the Karabakh Region Authority (KRU) for the districts of Nagorno-Karabakh that came under Baku’s control. The city of Stepanakert (Khankendi) is now under the jurisdiction of the KRU of the Ministry of Justice of Azerbaijan.

Upon arrival at Gulnara’s house with my crew, not long after that, her father in law Alihan Gregorian made a dramatic entry when he started crying out loud hugging the portrait picture of his fallen son and confessing his family’s tragic story of him losing his only son and his grandchildren losing their protective figure, their father.

Alihan is 66, and he is the father of six children: one son and five daughters. He lost his only son, who was 41 years of age, his name is Alosha Gregorian, who for Fifteen years served in the army.